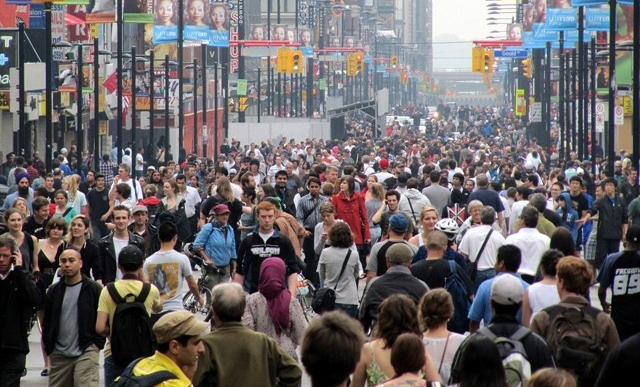 Whatever you are doing this summer, keep faith in the human condition.  Take the chance of a slower news cycle to put the prevailing narrative of despair into perspective.  Whilst it is crucial to appreciate the mistakes of the past and the challenges ahead, it is important and salutary to contemplate the progress that humanity has made.

When a report emerges of terrible wrongs inflicted on a minority group, leading to hunger, torture or the infringement of other human rights, call it out, oppose it, fight it.  But have confidence that the mass of humanity is making steps towards becoming better fed, more peaceful, and more respectful of other people.

When elements of the media foster intolerance, and provide a mouthpiece for writers who thrive on hatred, call it out, oppose it, fight it.  But put it in the context of a fitful but deep-seated shift towards liberty and tolerance being made across the world.

When the rights of a minority are being restricted in their schooling, call it out, oppose it, fight it.  But realise that humanity is becoming more literate, numerate, skilled and better informed about their rights and responsibilities; we are meeting our potential and we will harness it to achieve even greater progress in the future.

When a despot picks on the oppressed, call it out, oppose it, fight it.  But remember the scientists, engineers, medics, educators, researchers, journalists, civil servants, the vast majority of politicians, and billions of unsung people from all walks of life, who strive to make our world a better place.

When a political leader threatens our hard-won gains, call it out, oppose it, fight it.  But understand that they are swimming against the tide, they are appealing to a dwindling demographic, and they will be beaten.

When inequality thrives and hardship bites, call it out, oppose it, fight it.  But contemplate the gains people in the vast majority of the world continue to make in living standards, health, nutrition, communication, education, leisure, peace, safety, reason and science.

When your eyes are opened to an environmental threat, call it out, oppose it, fight it.  But don’t despair, don’t panic, and don’t act rashly.  Seek alternatives, seek solutions, and seek solace in the fact that humanity has faced down such challenges before and we will do so again.

Be aware of the internal biases we have that direct us towards a negative, fearful and oppositional worldview, and recognise the external influences which mitigate against a ‘factful’, hopeful, and optimistic one.  Then re-calibrate, celebrate, and play your part in humanity’s grand project.

Humanity has never been so healthy, peaceful and prosperous as it is at the moment, and with such a history of progress, why should we predict regress?

Fight the good fight, and have faith this summer.

PS  Take a look at the graphs below.  And read my earlier blog posts for some balance and context.  But hey, everyone deserves the right to be polemic once in a while! 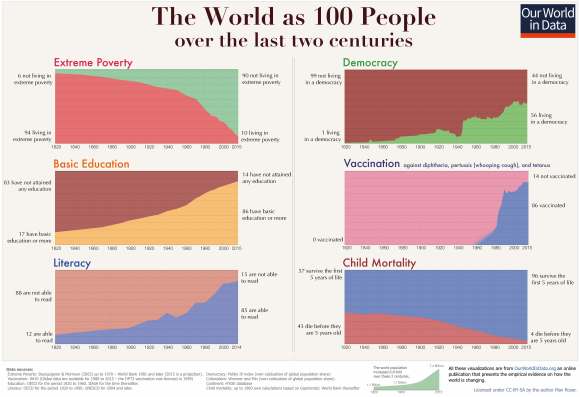 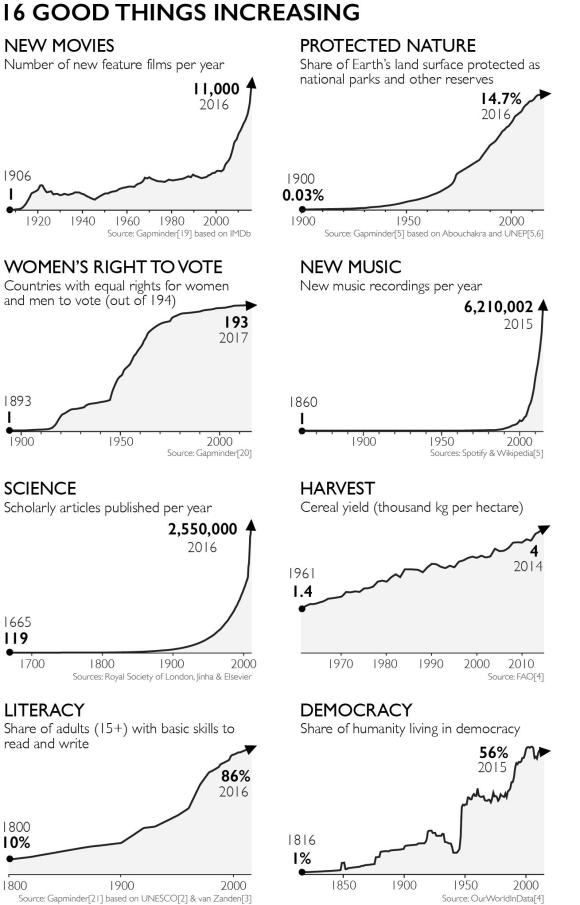 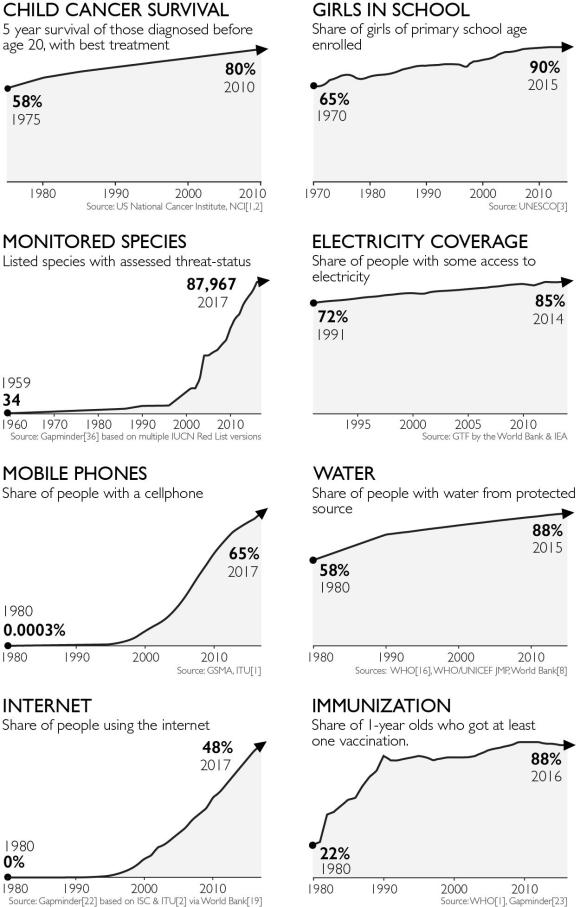 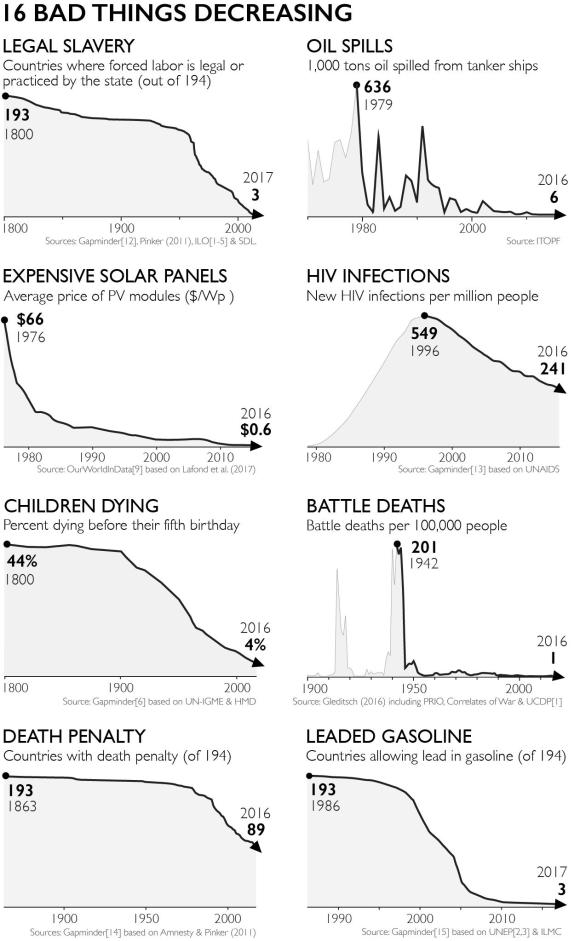 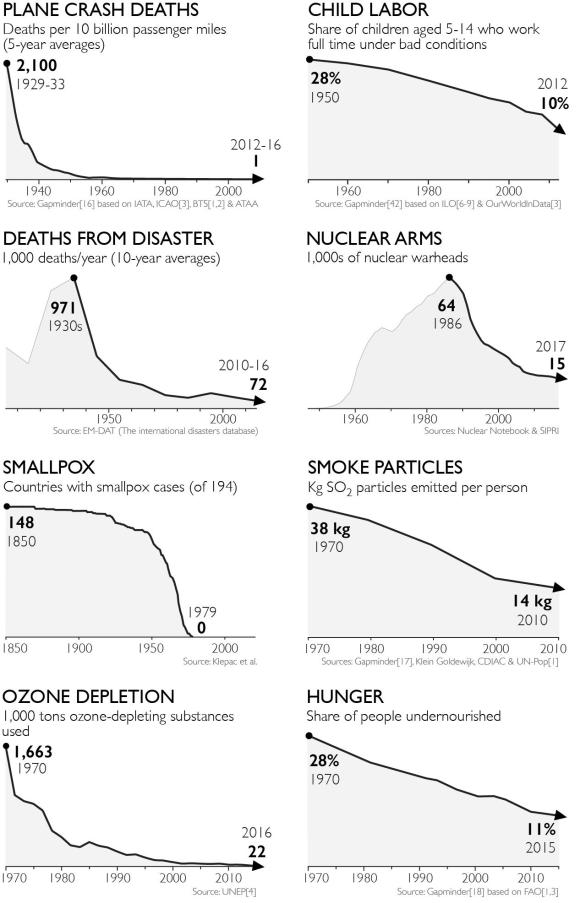 In lieu of my usual list of references, I’d like to express my gratitude at the end of an interesting academic year during which I have been able to explore several avenues of thought on this blog and beyond.  Thank you to Gapminder for their inspiration and for supplying a framework for my thoughts, and Max Roser’s Our World in Data for, well, the data (and graphs, and commentary too!).  Thanks also to Bobby Duffy for his superb ‘Perils of Perception’, Steven Pinker for the even more highly recommended ‘Enlightenment Now’ and ‘The Better Angels of Our Nature’, and Alex Standish for his inspiration and willingness to work with me on this theme in the future.  And thanks to many others who have commented on and supported me so far (I won’t name any more at this juncture for fear of offending my omission!).  Many references are to be found in my earlier blog posts.

As ever, your comments are welcome!