I was going to get all hot and bothered and write a polemical post on ‘humanity bashing’.

I had made the assumption that Chris Packham’s documentary ‘7.7 billion and counting’, which was recently aired on the BBC was misanthropic.  I had read about its wilder claims online as well as in the printed media – such as in my father-in-law’s copy of the Radio Times (Buerk, 2020).  I feared a dredging up of 1970s-style fears such as a ‘population time bomb’ (see photo below).  My optimistic mindset was also rankled at reading statements such as Packham’s belief that Lagos is “pre-apocalypse Earth”, which was quoted in the same article. 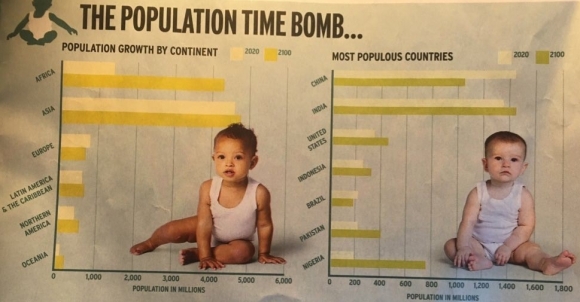 I was ready to mount a defence of humanity against the onslaught of pessimism.  At the start of the show, I hovered my thumb over a blank tweet, ready to release a tide of optimism onto an unsuspecting internet… or at least onto my small band of followers.

Misanthropy and the ‘human-sceptic’ narrative

Discussions about population control in the context of sustainability should of course take place, but, in the absence of a fuller awareness of demography and global progress, they can stray into dangerous territory – a turning of humanity against itself.

A number of instances in the weeks preceding the documentary had persuaded me that misanthropy in one form or another is still alive and well.  The letters page of the Yorkshire Post, for example, hinted at harsh solutions to the supposed ‘population crisis’: 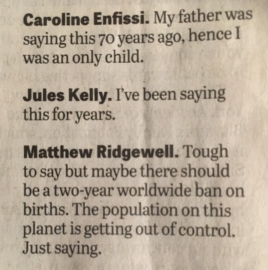 Comments on an otherwise moderate Facebook thread about environmental action had also taken me aback: 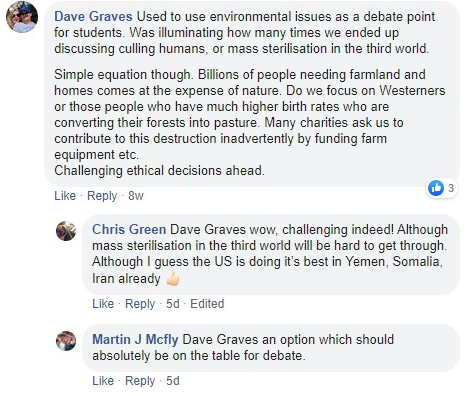 Closer to home, whilst talking with a teaching colleague about the environment, he said “What no-one seems to talk about is the elephant in the room.”  I queried him: “Do you mean climate change?”.  “No” he said, “overpopulation”.  I didn’t want to press him as to what he felt the next logical stage would be to solve this problem; I feared his response.

Even David Attenborough, a patron of Population Matters, and someone I hugely respect, feeds into this ‘human-sceptic’ narrative: he is quoted on their website as saying:

“All our environmental problems become easier to solve with fewer people, and harder – and ultimately impossible – to solve with ever more people.”

A commonly raised concern is that if population reaches a certain level, then ‘limits to growth’ are reached and either the environment or society – or possibly both – suffers.  This is the essence of Malthusianism.  Thomas Malthus argued in 1798 that population tends to increase faster than the supply of resources needed to sustain it.  Despite being disproved in almost all scenarios – as Amartya Sen points out, most modern famines, for example, are not due to a decline in the availability of food, but rather to a restriction in food supplies – Malthusianism persists.  The misanthropy that Malthusianism fosters is dangerous for anyone who is interested in human flourishing and progress.

Population control can be used as an excuse to subjugate the world’s poor.  It can be used an excuse to reduce immigration.  It can be used as an excuse to reduce aid budgets.  It also contributes towards an anti-progress narrative: in ‘Factfulness’, Hans Rosling recounted how a student told him “They [people in developing and emerging countries] can’t live like us.  We can’t let them continue developing like this.  Their emissions will kill the planet” (2018: 214).  Rosling countered this by noting “how easily we in the West seem to shift responsibility away from ourselves and onto others.  We say that ‘they’ cannot live like us.  The right thing to say is, ‘We cannot live like us” (ibid: 215).

In the more distant past, famine has even been welcomed as an effective method for keeping numbers down: sources quote the British civil servant responsible for Ireland, Sir Charles Trevelyan, as saying that the great famine in the 1840s was an “effective mechanism for reducing surplus population”.

So as I sat down to watch the documentary, I thought I would be confronted with a barrage of pessimism; an onslaught of doom-mongering.  My thumb hovered expectantly.

But I was determined to try to watch the programme with an open mind.

It didn’t begin well: Chris Packham drew a graph showing population rising exponentially, stopping at 2020, with the unspoken implication being that it was due to carry on rising as the same rate.  Below is a very similar graph, from the website of Population Matters, which Chris Packham is a patron of: 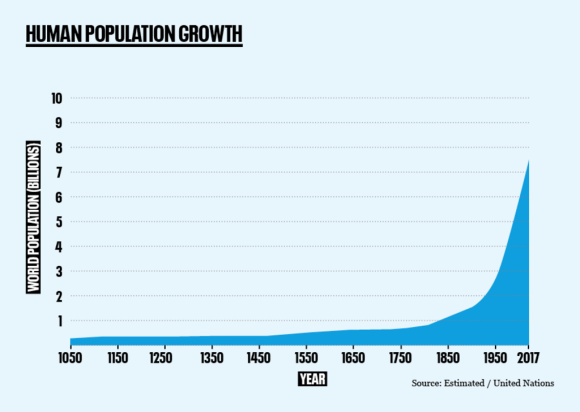 A slightly more even-handed graph might have been one like the one below, which shows the most recent median projections from the United Nations, superimposed with a line graph showing a drastically slowing growth rate:

Packham also spoke about being “terrified” about the future of his step-child and of humanity in general, and the whole programme lacked sufficient context in terms of the great strides that have been made, especially since the 1950s, in almost all aspects of human development, ranging from healthcare to education, and living standards to human rights, which are covered in ‘Factfulness’, as well as ‘Progress’ by Johan Norberg (2017) and ‘Enlightenment Now’ by Steven Pinker (2018),  and which I have written about here and in Alcock (2019a, 2019b).

It also came as no surprise that the local environmental improvements that are sometimes seen as countries enter later stages of development (cleaner air and water, peak car use, energy efficiencies, and so on) were not mentioned.

However, as the programme progressed, and the views of a range of demographers and other experts were aired, I began to note some areas of common ground with Packham (and indeed with Population Matters):

I am also heartened that Population Matters has dropped or modified many, if not yet all, of its most misanthropic policies.  These include campaigning to restrict the flow of refugees to the UK, and its PopOffsets scheme to ‘offset’ carbon emissions by funding family planning schemes in the developing world, which was criticised as being condescending and of enabling affluent polluters to assuage their guilt (the latter criticism can be applied to carbon offsetting, which I defend as a short-term measure here).

Incidentally, calm and rational examination of the role of demographics in shaping a sustainable future for our planet may help to assuage one of my other concerns: that too much guilt is being heaped upon members of the public to encourage them to make radical lifestyle choices.  I fear that the pressure on individuals to ‘do something’ can result in eco-anxiety, and wider issues such as demographics require more attention in both academic and popular discourse.  I would have been even happier if I had seen more emphasis on the role that governments can play in terms of nudging and legislating towards policies such as reducing meat consumption and promoting energy efficiencies and environmentally-friendly energy generation.

Throughout the documentary, I was in communication with a Population Matters spokesperson, and by the end of it, I tweeted that I had reached somewhat of a truce with them.  We have more beliefs in common than those which divide us.  So where does that leave me now that I am a little less hot and bothered?  Here are a few points I have been chewing on in recent days:

Approaching issues with an open-mind is crucial, as is sensibly engaging with people who may have an opinion which differs from yours.

It is important to take previews with a pinch of salt: they are designed to hook media consumers into watching or listening certain content.  Previews will latch on to the most extreme parts of a message to try to attract our attention.  The media will not easily change their ways: as Hans Rosling et al put it in ‘Factfulness’, “I cannot see even the highest-quality news outlets conveying a neutral and nondramatic representative picture of the world… It would be correct but just too boring” (2018: p.253).

Critical media engagement is a crucial skill which could and should be taught.  We particularly need a way of engaging with social media consumers which will encourage people to respond more critically with output relating to the environment and human progress.  On an individual basis, this means following the ‘rules of thumb’ outlined in ‘Factfulness’ – and summarised here – but I go further than Rosling.  He says “it is up to us as consumers to learn how to consume the news more factfully” and “it is not the goal of activists or politicians to present the world as it really is” (p.253).  However, I think that it is crucial that alongside individual changes in behaviour, we should also move towards governmental, corporate and educational initiatives to ingrain media literacy and critical thinking among the widest possible section of society.  The time is right for this.  As Bobby Duffy wrote in The Perils of Perception:

“While we shouldn’t think there was ever an age of perfectly neutral information, we also shouldn’t kid ourselves: we’re travelling towards a world where disinformation has more opportunity to be created and travel faster” (2018: 237).

I am working on such a project at the moment.  This, I believe, is one of the great issues of the media-saturated and uncertain world of the 2020s.  Without such a push, I fear a proliferation of the already worrying amount of comments which tend towards the extremes – such as those noted earlier from Facebook and the Yorkshire Post – and the insidious growth of unspoken feelings which go against the greater good.

It is possible to reinvigorate enlightenment values of reason, and to aim for a more human – and humane – way of viewing the world.  Open-mindedness and critical thinking are complex but essential weapons in this mission.

References (in addition to those hyperlinked in the text):

DeFries, R. (2014) The Big Ratchet: How Humanity Thrives in the Face of Environmental Crisis.

Duffy, B. (2018) The Perils of Perception: Why We’re Wrong about Nearly Everything. London: Atlantic.

Rosling, H., Rosling, O. and Rosling Rönnlund, A. (2018) Factfulness: Ten Reasons We’re Wrong about the World – and Why Things are Better than you Think. London: Hodder and Stoughton.

2 replies on “Population matters – and so does critical thinking”

Thank you Alex! I will try to. I am applying for a PhD at the moment too.